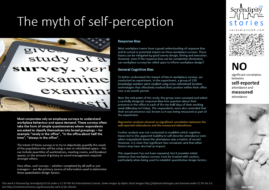 Story – the myth of self-perceptionDownload as PDF

Most corporates rely on employee surveys to understand workplace behaviour and space demand. These surveys often take the form of simple questionnaires where respondents are asked to classify themselves into broad groupings –for example “rarely in the office”, “in the office about half the time”, “always in the office”.

The intent of these surveys is to try to objectively quantify the needs of the population who will be using a new or refurbished space –this can include quantities of workstations, meeting rooms, and breakout spaces, or the amount of privacy or sound management required amongst others.

Very often, such surveys –whether completed by all staff or just managers –are the primary source of information used to determine these quantitative design factors.

To better understand the impact of bias in workplace surveys, we conducted an experiment. In the experiment, a group of 120 knowledge workers were studied using cross-referenced location technologies that effectively tracked their position within their office over a six month period.

Near the mid-point of this study, the group were surveyed and asked a carefully designed, response-bias-free question about their presence in the office in each of the ten half-days of their working week (Monday to Friday). The respondents were also reminded that their actual presence was known as it was being measured as part of the experiment.

Regression analysis showed no significant correlation between the self-reported attendance and the measured attendance.

Further analysis was not conducted to establish which cognitive biases led to this apparent inability to self-describe attendance even when respondents knew the attendance was a matter of record. However, it is clear that significant bias remained, and that other factors may have also had an impact.

This experiment has not been repeated, but it provides initial evidence that workplace surveys must be treated with caution, particularly when being used to establish quantitative design factors.